Assets Tracing and Enforcement of a Foreign Judgment

All major practices of attorneys at law "BOGATYR & Partners'', namely civil and criminal litigation and investigations that involve international and transnational matters, fraud claims, white collar matters, assets tracing, arbitration, international criminal charges and those who are subject to economic sanctions, post M&A disputes, partnership and joint venture disputes and also provision of advice on contractual and insolvency matters as well as issues relating to the enforcement and recognition of judgements in Ukraine and abroad , received  high grading from the annual rating research «Ukrainian Law Firms 2016. A Handbook for Foreign Clients».

In addition, the senior partner of our firm Volodymyr Bogatyr was included in the list of famous lawyers:

As a leading individual in Criminal Law/ White-Collar Crime, Litigation. 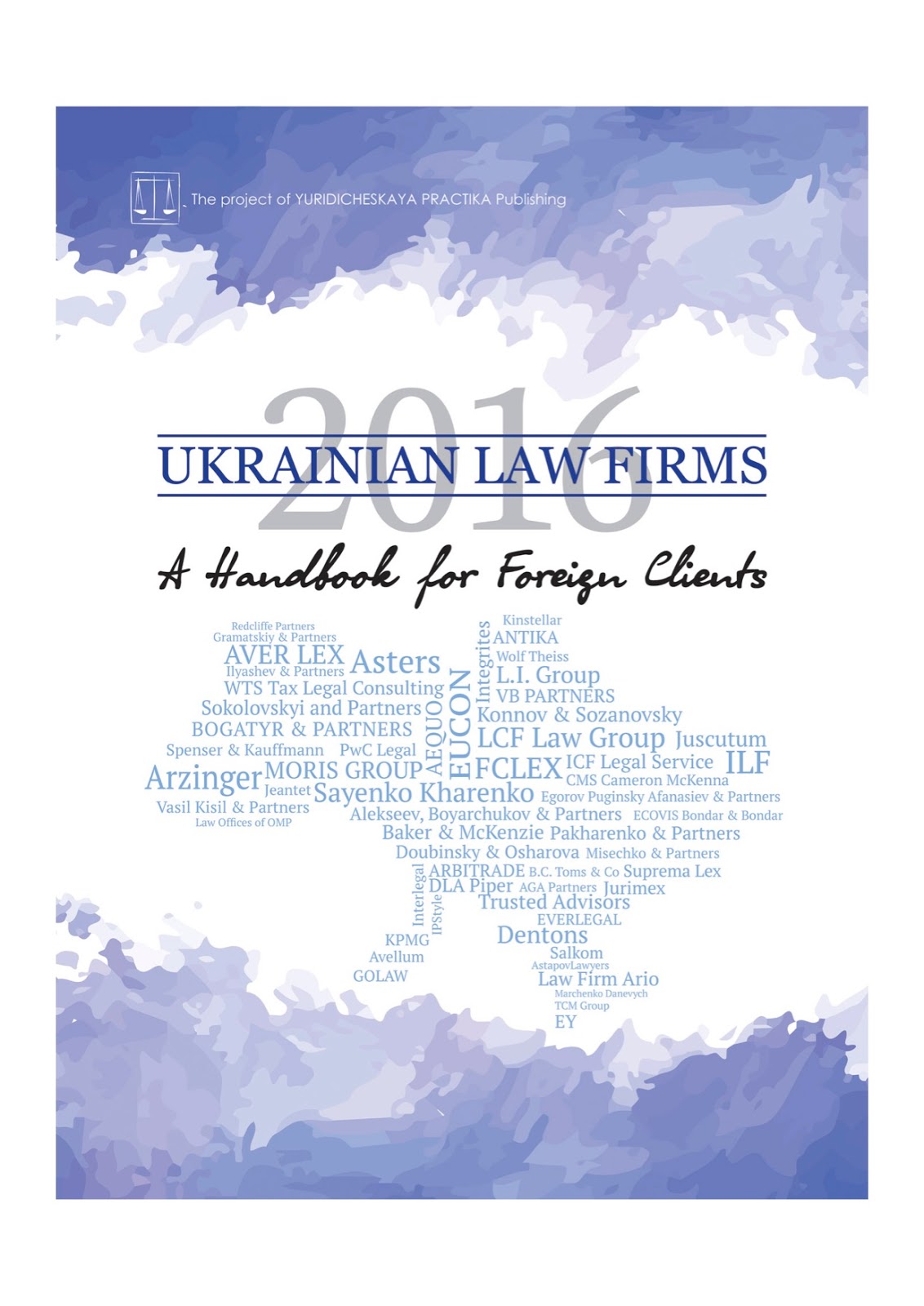 The success of any litigation and arbitration case depends mostly on the capability of the plaintiff to trace and locate sufficient assets of the defendant’s debtor to block and freeze the same as security for the satisfaction of any court decision or arbitral award to be issued in the main court or arbitral proceedings. The legal teams of BOGATYR & PARTNERS and SOTERIS PITTAS & Co LLC use the services of their corporate investigators and forensic specialists to trace and identify hidden assets around the world.
On the Recognition and enforcement of a foreign Judgment
A judgment that has become final is enforceable throughout the country where it has been issued.
But to enforce it in another country, a special procedure is employed that includes the recognition of this foreign judgment by virtue of a relevant order by a competent court of the country where such enforcement is requested. Apart from judgments of foreign courts, foreign arbitral awards may also be enforced.
For a foreign judgment or arbitral award to be recognized and enforced in Ukraine, the appropriate application needs to be led. Courts consider applications for recognition and enforcement of foreign judgments on the basis of international treaties on mutual legal assistance or on the principle of reciprocity.
Pursuant to Clause 1, Article 390 of the Civil Procedural Code of Ukraine (CPC), an enforceable foreign judgment is recognized in Ukraine if its recognition is warranted by international treaties ratified by the Verkhovna Rada of Ukraine, or on the principle of reciprocity.
Pursuant to Part 2, Article 390 of the CPC of Ukraine, if the recognition and enforcement of a foreign judgment depends on the principle of reciprocity, this principle is deemed active, unless proven otherwise. In addition, the principle of reciprocity (ad hoc) is also applicable on the grounds that the judgments of Ukrainian courts are recognized and enforced in another country. 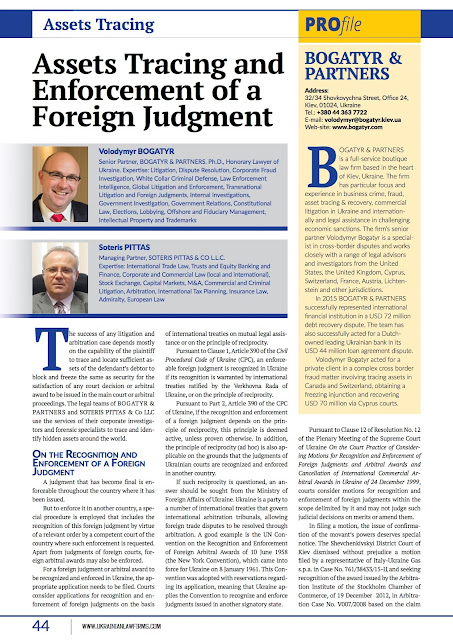 If such reciprocity is questioned, an answer should be sought from the Ministry of Foreign Affairs of Ukraine. Ukraine is a party to a number of international treaties that govern international arbitration tribunals, allowing foreign trade disputes to be resolved through arbitration. A good example is the UN Convention on the Recognition and Enforcement of Foreign Arbitral Awards of 10 June 1958 (the New York Convention), which came into force for Ukraine on 8 January 1961. This Convention was adopted with reservations regarding its application, meaning that Ukraine applies the Convention to recognize and enforce judgments issued in another signatory state.
Pursuant to Clause 12 of Resolution No. 12 of the Plenary Meeting of the Supreme Court of Ukraine On the Court Practice of Considering Motions for Recognition and Enforcement of Foreign Judgments and Arbitral Awards and Cancellation of International Commercial Arbitral Awards in Ukraine of 24 December 1999, courts consider motions for recognition and enforcement of foreign judgments within the scope delimited by it and may not judge such judicial decisions on merits or amend them.
In ling a motion, the issue of confirmation of the movant’s powers deserves special notice. The Shevchenkivskyi District Court of Kiev dismissed without prejudice a motion led by a representative of Italy-Ukraine Gas s.p.a. in Case No. 761/38433/15-Ц and seeking recognition of the award issued by the Arbitration Institute of the Stockholm Chamber of Commerce, of 19 December 2012, in Arbitration Case No. V007/2008 based on the claim lodged by Italy-Ukraine Gas s.p.a. against NJSC Naftogaz of Ukraine on the grounds that the Italian notary only verified the authenticity of the principal’s signature, not his powers. The Court also noted that the case materials included only the certificate of registration of Italy-Ukraine Gas s.p.a. and the translation of its content evidenced that the principal was the chairman of the board of directors in the company. However, according to the said extract, the company’s interests should be represented by the chairman of the administrative council rather than the chairman of the board of directors. Additionally, as stated in the “Officials” section of the said certificate, the principal is a board member and concurrently chairman of the board of directors, incumbent until the approval of the financial statements of 31 December 2013. Nonetheless, the court had not received any evidence that he was such an of cial when the case was heard. In another Case, No. 1511/2458/2012, the Illichivsk City Court of Odessa Region, in considering a motion for recognition of several arbitral awards of the Federation of Oils, Seeds and Fats Associations (FOSFA), found that some of the awards issued by the FOSFA were annulled by the High Court of Justice of England citing the lack of jurisdiction of the arbitration body. This, however, was no obstacle to granting permission for enforcing these awards. The Illichivsk City Court of Odessa Region explained its judgment by the fact that the principle of reciprocity was not present in the given case, which fact served as grounds for its rejection to recognize the judgment of the High Court of Justice of England.
Given that the procedural rules of the countries signatories of the New York Convention differ, the procedure for recognizing a foreign judgment is different in practice.
Ukraine is not a European Union member, therefore its mechanism of recognition and enforcement of foreign judgments does not include elements of EU legislation. Court judgments issued in states that are not EU members are recognized and enforced in accordance with Law No. 121(1)/2000. 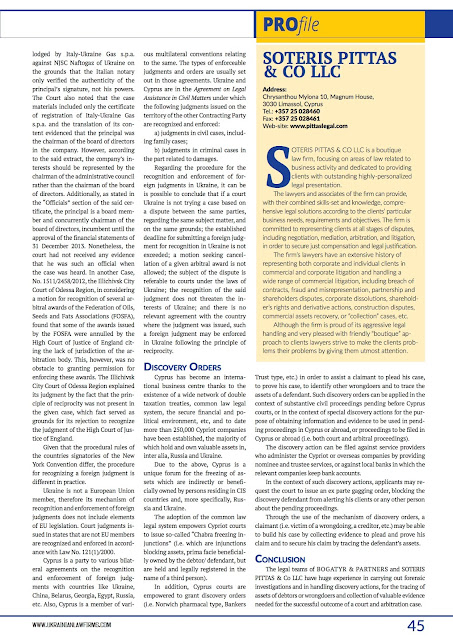 Cyprus is a party to various bilateral agreements on the recognition and enforcement of foreign judgments with countries like Ukraine, China, Belarus, Georgia, Egypt, Russia, etc. Also, Cyprus is a member of various multilateral conventions relating to the same. The types of enforceable judgments and orders are usually set out in those agreements. Ukraine and Cyprus are in the Agreement on Legal Assistance in Civil Matters under which the following judgments issued on the territory of the other Contracting Party are recognized and enforced:

a) judgments in civil cases, including family cases;
b) judgments in criminal cases in the part related to damages.
Regarding the procedure for the recognition and enforcement of foreign judgments in Ukraine, it can be is possible to conclude that if a court Ukraine is not trying a case based on a dispute between the same parties, regarding the same subject matter, and on the same grounds; the established deadline for submitting a foreign judgment for recognition in Ukraine is not exceeded; a motion seeking cancellation of a given arbitral award is not allowed; the subject of the dispute is referable to courts under the laws of Ukraine; the recognition of the said judgment does not threaten the interests of Ukraine; and there is no relevant agreement with the country where the judgment was issued, such a foreign judgment may be enforced in Ukraine following the principle of reciprocity.
Discovery Orders
Cyprus has become an international business center thanks to the existence of a wide network of double taxation treaties, common law legal system, the secure financial and political environment, etc, and to date more than 250,000 Cypriot companies have been established, the majority of which hold and own valuable assets in, inter alia, Russia and Ukraine.
Due to the above, Cyprus is a unique forum for the freezing of assets which are indirectly or beneficially owned by persons residing in CIS countries and, more specifically, Russia and Ukraine.
The adoption of the common law legal system empowers Cypriot courts to issue so-called “Chabra freezing injunctions” (i.e. which are injunctions blocking assets, prima facie beneficially owned by the debtor/ defendant, but are held and legally registered in the name of a third person).
In addition, Cyprus courts are empowered to grant discovery orders (i.e. Norwich pharmacal type, Bankers Trust type, etc.) in order to assist a claimant to plead his case, to prove his case, to identify other wrongdoers and to trace the assets of a defendant. Such discovery orders can be applied in the context of substantive civil proceedings pending before Cyprus courts, or in the context of special discovery actions for the purpose of obtaining information and evidence to be used in pending proceedings in Cyprus or abroad, or proceedings to be led in Cyprus or abroad (i.e. both court and arbitral proceedings).
The discovery action can be led against service providers who administer the Cypriot or overseas companies by providing nominee and trustee services, or against local banks in which the relevant companies keep bank accounts.
In the context of such discovery actions, applicants may request the court to issue an ex parte gagging order, blocking the discovery defendant from alerting his clients or any other person about the pending proceedings.
Through the use of the mechanism of discovery orders, a claimant (i.e. victim of a wrongdoing, a creditor, etc.) may be able to build his case by collecting evidence to plead and prove his claim and to secure his claim by tracing the defendant’s assets.
Conclusion
The legal teams of BOGATYR & PARTNERS and SOTERIS PITTAS & Co LLC have huge experience in carrying out forensic investigations and in handling discovery actions, for the tracing of assets of debtors or wrongdoers and collection of valuable evidence needed for the successful outcome of a court and arbitration case. 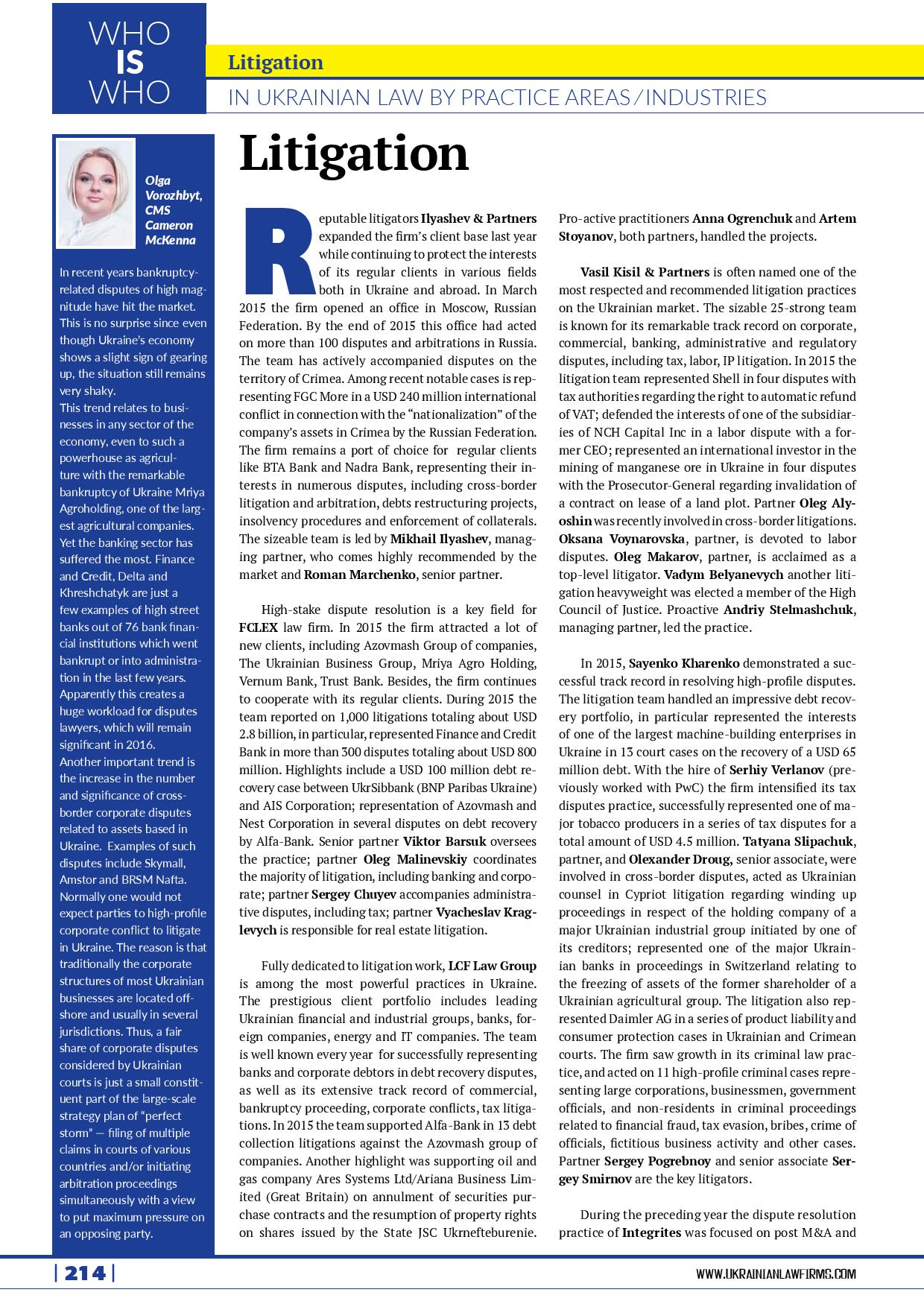 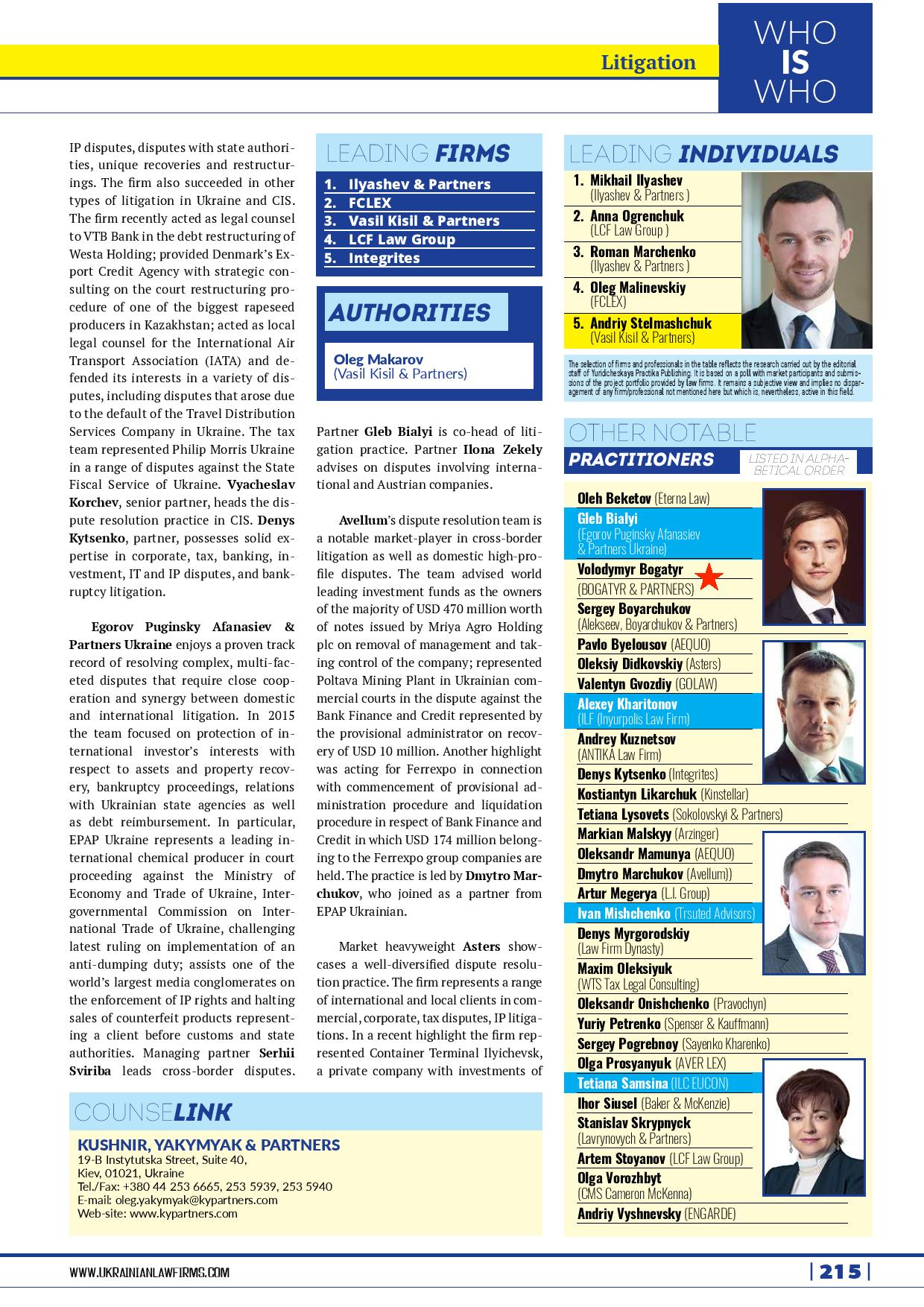 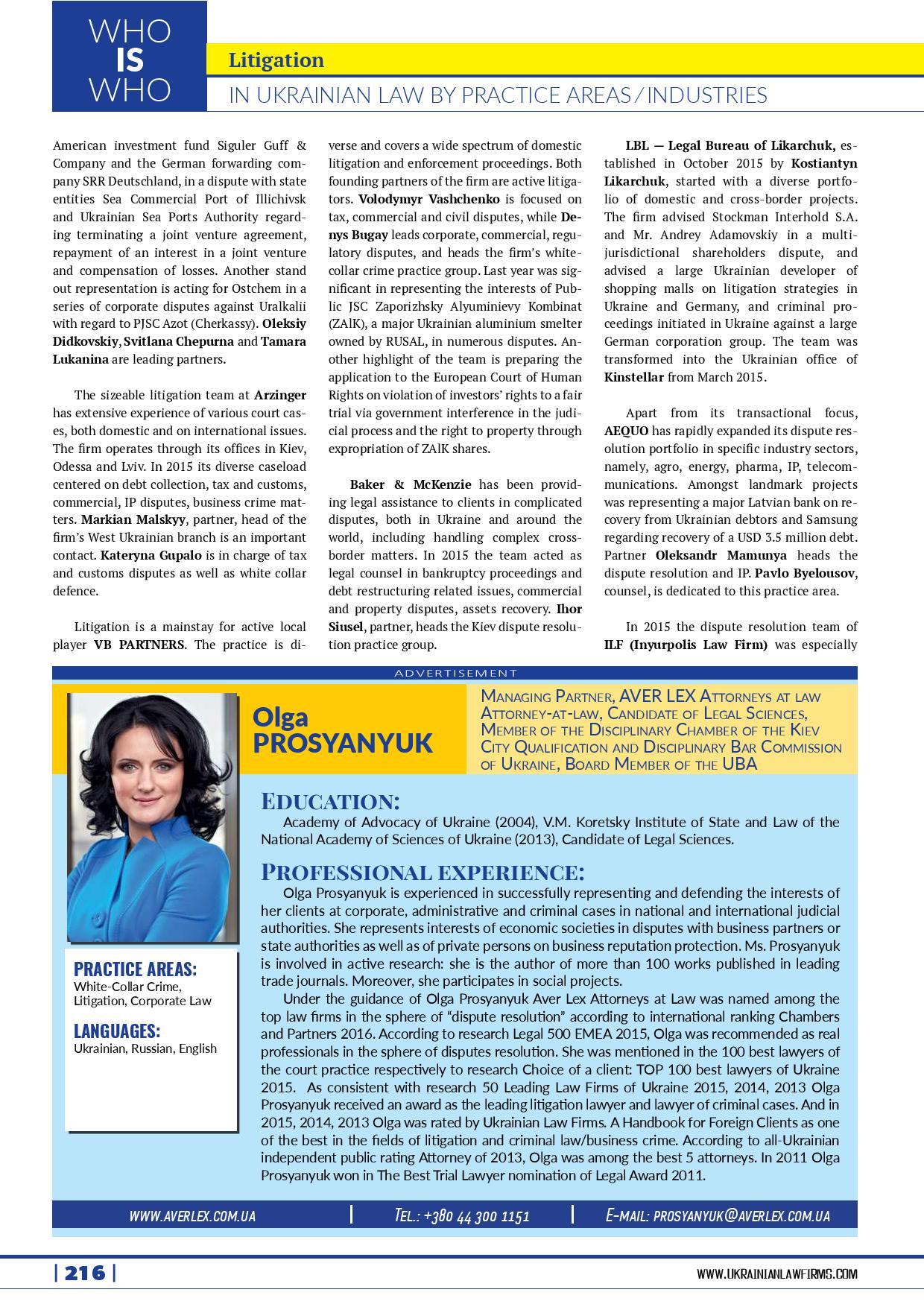